Once upon a time, when I ran a little personal development blog, I started releasing cheat sheets. They were quite popular, and as the traffic for them grew, so did my desire to make more of them - and to find a way to help other people make them and share them. Eventually, Cheatography was born, as a place to make and share cheat sheets for free. Now it plays host to over 2000 cheat sheets in 25 different languages, and for a huge variety of topics, from programming to gardening to audio equalisation.

By way of an example, here's the most popular cheat sheet on the site, created by me a very long time ago (but still useful). Click through to see the online version or to download a printable PDF. 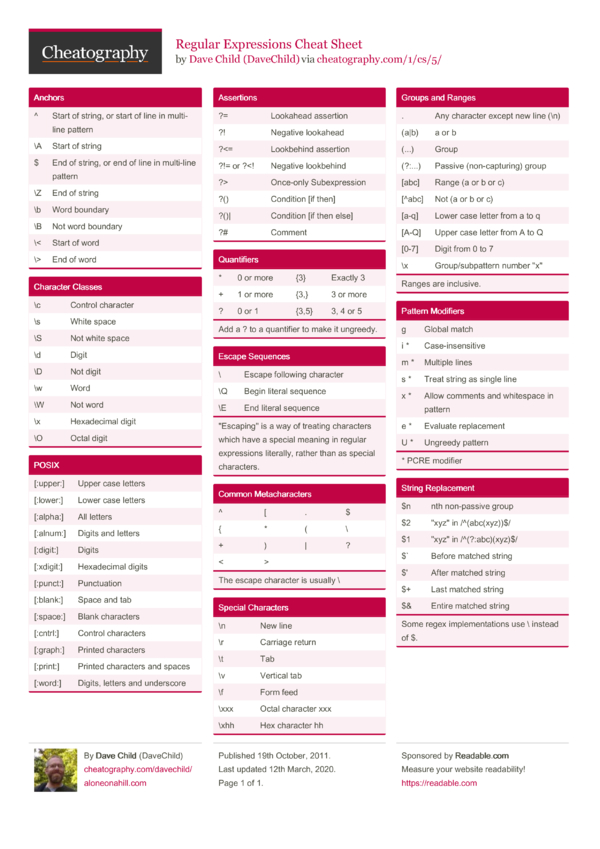 A few days ago, I completed a review of my web properties from a critical, money-centric view. Cheatography makes a small amount of money, but not a brilliant profit for the amount of traffic it serves. And it's capable of much, much more. It's suffered from a bit of founder neglect, as I've left it to its own devices, largely. I monitor new postings and comments, but there's been little pro-active promotion of the site from me over the years.

It became clear from my review that I have too many plates spinning. I work full time as a developer for my own company, and I have a toddler and newborn twins, so time is a rare and precious commodity. I was being torn in too many directions. So, as part of my March income report I came up with a plan for the month, and that included making a few changes to Cheatography:

You could barely call that a list. And fortunately, I've pretty much completed the "list" already, along with a couple of extra small changes. Go me!

First, and I'm chuffed to be able to announce this, I've recruited a talented and enthusiastic new community manager to the site. She'll be introducing herself on the (stagnant) Cheatography blog soon, and she's charged with some content creation and community management, with a sprinkling of social media bits and pieces. She's working part-time, and the time she puts in to the site is time I now don't need to, and time I can spend building out features or working on other projects.

It's taken a huge weight off my mind, and it's reinvigorating knowing someone else is pushing the site along. I think there's an element of "founder's guilt" that compliments the "founder neglect" I mentioned above - both of those are hugely reduced. And it makes sense to outsource the things that I can outsource. The site isn't making buckets of money, but it's making enough that it can afford some of Natalie's time every month, and she stands to earn a bonus from the site every month as the income grows as well.

It will be interesting to see how this affects the site over the next few months, but already it seems to me that the site feels just a little more active. With any luck, having someone dedicated to the community will help a real community develop there.

Update: After a couple of weeks of trying out the arrangement, she's struggled to carve out the time to work on Cheatography - and I know the feeling. Being a full-time student and having a job as well ... well, it was always going to be tough! I'm disappointed, because finding someone else so well suited to the role is going to be difficult. However, that's what needs to be done!

Without wishing to get too technical, I use a CDN on Cheatography. That's a way of delivering static file assets - primarily the cheat sheet thumbnails - to users without loading the server down, and doing so a little more quickly that if they came directly from my server. I was using Amazon for this, and last month my bill for hosting, just for that part of the system, was over $100. For a site earning $300-$400 a month, that's not good.

So, I've switched to CloudFlare, for almost the same thing - and a bit more. They provide the same kind of caching and performance boosting system as I was getting through Amazon, with the added benefits of a few features like HTTPS hosting, some automatic filtering of abusive requests, and some more geeky features that I won't bore you with. For all of this - and they are serving everything, not just images, they charge $20 per month. It's cheap enough to be concerning. But so far they're serving over 1,400,000 page and file requests per day with no problem at all. The server performance is becoming a bit more consistent, and I'm working to improve the site speed as well. So far, it's been a very positive change.

The other changes prompted me to get a couple of other items ticked off my to-do list. The most visible of these is a change to the automatic tweeting of new cheat sheets to the @Cheatography Twitter account. Announcements were very dry before - no hashtags, no thumbnail, no username. Just a standard, boring, eminently missable and dismissable tweet. Now, it's rather more engaging, and the stats from Twitter are showing people are responding much better already. In addition to the new cheat sheets, there's also a new daily tweet to highlight a good quality older cheat sheet from the collection.

And in with the new!

That's it for Cheatography for the month - my main focus is the substantial upgrade to Readability-Score.com, which I hope to complete within the next week and will be writing up here afterwards.