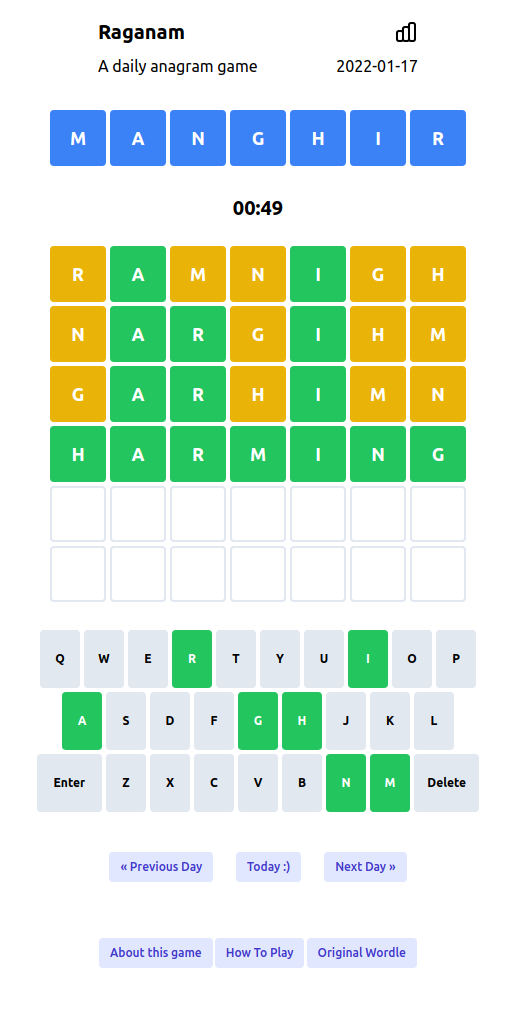 You may have heard of Wordle. If not, you may have been in a coma, or living under a rock; either way, you are the envy of millions.

My Wordle journey was probably much the same as most. It started with irritation, with my Twitter stream being flooded by mysterious green and yellow squares. Mild irritation gave way to grudging curiosity, and then participation, and then obsession. I'm a whore for pop fads, apparently.

Oh well, what else can you do but lean in to these things?

But there's something mildly frustrating about Wordle. Two things, actually.

The first was that there's no time pressure, just the six guesses. That's a blessing and a curse. It's a blessing, because it gives the game a nice, relaxed, zen feel. It's a curse, because getting an answer in 4 guesses in 20 seconds, that's much much better than getting an answer in 4 guesses in 20 minutes, but the game - and more importantly your social connections - don't know or care how great you are.

The second is that the puzzle is effectively a two-stage anagram game. The first stage is finding or inferring the letters in the answer, the second is solving the anagram. That's annoying, because the first part is luck but eats away at your chances at the second part.

So I did what I usually do, and let my brain wander off imagining different puzzle games, similar to World, but addressing those two little frustrations.

I don't know who you are. I don't know what you want. If you are looking for someone to make you a website, I can tell you I don't have time. But what I do have are a very particular set of skills; skills I have acquired over a very long career. Skills that make me a nightmare for people like you. If you check out my latest project now, that will be the end of it - I will not look for you, I will not pursue you ... but if you don't ... well, nothing will happen, I'm a developer not a retired spook with a thirst for Eustern European blood.

I also have a huge database of words, courtesy of CrosswordCheats.com. This is all I need to make a shiny new thing.

What's The Game, Then?

My puzzle game is the second part of Wordle, effectively, the anagram piece of it. Each day the website finds a part of words that are anagrams. Anagramy? Anagramous? It shows you one of the words, and you have six guesses to work out what the other is.

For every puzzle, there are some basic rules:

It also allows you to do every previous day's puzzle, though those don't count for your success streak.

The game is at Raganam.com, hope you have fun!