If I might start by begging your indulgence - please look down at your keyboard. It's not very interesting, I know, but this won't take long. You see at the top left of the section containing letters a Q? Of course you do. To the right of that, you will more than likely spot W, E, R, T and Y. You might be surprised to learn that the reason you see those letters, and the others on your keyboard, in the position that they are in is because this makes your typing slower. That, and economics.

"Why", you may well ask, "would keyboards be designed to make typing slower?". A good question. Back when Christopher Sholes created the Qwerty layout for his new typewriter in the 1800s, it solved a problem. Economics has kept it in place ever since.

The main problem Sholes faced was that of bars colliding during typing. If two keys near each other were pressed quickly in succession, the bars they controlled sometimes collided or jammed. In order to avoid this problem, Sholes re-arranged his keyboard so that common combinations of letters were hard to type, thus making the keyboard slower and reducing the chance of jamming.

The other reason for the placement of some of the Qwerty keys in certain places was to boost typewriter sales. In order for salesmen to be able to sell typewriters, it was important that they not be seen 'hunting and pecking' during demonstrations. R was moved for this reason, and replaced the period on the left of the T.

That is why, if you look once again at your keyboard, you will see that commonly typed pairs of letters are well spaced out, and that the word "typewriter" can be typed using just the letters on the top row. 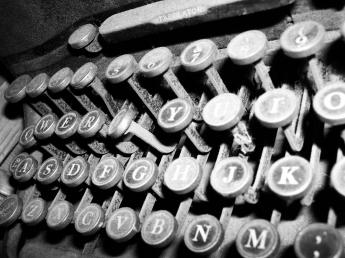 Once the Qwerty layout was in place, it was simple economics that kept it there. Typists were trained to use it, which meant that makers of newer typewriters had to use the same layout, otherwise potential customers would need to re-train staff. The same has applied ever since - people make Qwerty keyboards because that is what people are trained to use, not because it is the best layout.

Dvorak is an alternative to Qwerty. It is a keyboard layout designed to minimise movement, and make typing as easy and painless as possible. The idea behind it is to have the most commonly typed keys under the fingers, and make it as easy as possible to type common words and combinations of letters. To give an impressions of just how big a difference this makes, consider that the average Dvorak typist's fingers will travel about one mile in a day of typing. A Qwerty typist's will travel anything from 16 to 20 miles. Try to consider, for a moment, the effect that must have on your fingers.

Dvorak is easy to pick up, taking about half as long as Qwerty. That is little comfort to those who are already familiar with Qwerty, as it means starting over. However, the benefits certainly make it worth spending a couple of weeks learning to type all over again. For many of us, that is actually a benefit, since many computer users never learned to type properly in the first place.

Changing your PC over to Dvorak is actually quite easy. In your Control Panel, in the Keyboard settings, you will see a tab for "Input Locales". If you want to use Dvorak, simply select a Dvorak layout from the drop down on this screen (please note - you may have to re-start running applications for the change to take effect within them).

Changing the keys themselves is actually the trickiest bit of the process. You have a few options though. Before you try and change your keys though, I recommend you learn to use the keyboard. If you wait before changing your keys over, you will avoid hunting and pecking, and your typing will be all the better for it. If you do want to change them, you can use stickers (probably the quickest technique), and some keyboards make it very easy to move keys around. There are also suppliers who offer specific Dvorak keyboards, though these are rare.

Take another look at your keyboard. Are you really happy using something that intentionally slows you down? Something that makes you move your hands and wrists far more than is necessary? Would you not rather use something that was designed to make your life easier?

Update, 4th April 2007: Josue Salazar changed his Macbook to Dvorak - in part, he says, because of this article. Check out the photoset: Dvorak Black Macbook Photo Set.